When the cruelest blows of winter drive me indoors, I try to use the time productively, reviewing images, studying and practicing post processing techniques, and making sure my equipment is ready for some busy photography days ahead.  A few competition pieces have emerged from my computer time, including some new monochrome treatments for some recent images that I particularly like. 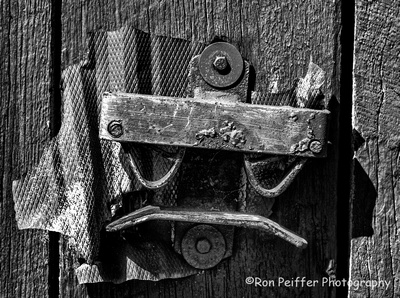 Ain't Pretty But It WorksIMG_9959
A barn latch of peculiar construction, this black and white image seems to frown at the viewer. The latch attests to the ingenuity of farmers. In a number of cases, barn latches were highly invented, inventive, and most of all functional. So how pretty does one of these gizmos need to be anyway?

Perhaps my most favorite is "Ain’t Pretty But It Works." I processed the image initially in NIK HDR Efex Pro, then brought up some detail using the Topaz plugin Clarity.  Lastly, I converted it to black and white using NIK Silver Efex Pro.  The challenge was to bring out the detail and to let some of the dark areas go to black or nearly black.  HDR sometimes equalizes the tonal qualities too much, so a little bit of brushing with the burn tool helped differentiate the detail in the image.  In competitions this winter, one judge liked it for several reasons, including the abstract frowny face.  Another liked the richness of the detail.  One placed it first and the other second in two different club competitions. It was nice to get some endorsement  for an image in which I had invested some work. 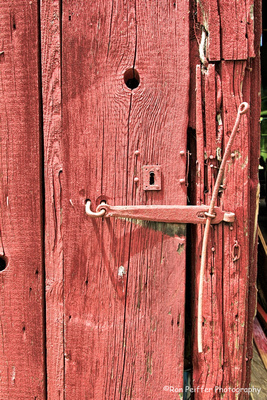 Unfortunately, it is not likely a gallery image.  Likely, few buyers would frame it and hang it on their walls. But it does tell a story about farm life, priorities, and functionality.  I found several other handmade latches around barns in recent months, and they all remind us that busy farmers are just fine with the tools and materials at hand.  They don’t have to make excuses to anyone for their handmade solutions crafted hastily from available materials.  A speedy repair works well enough to go on to the more pressing priorities.  And the lesson works well in our own lives, I think.

The lesson for me was the role of Context in an image’s appeal.  On gallery walls and in photo competitions, art pieces and photographs are judged in isolation of any external context other than the experiences a viewer takes to the gallery.  A stand-alone photograph clicks for one viewer because the image is viewed within the silent context in the viewer’s head, based on his or her personal experiences.  The viewer does not have to reveal to others the trigger nor the emotion released by an image.  I am wondering if an image’s success turns on its ability to connect in isolation.  Part of the craft of the photograph is to produce the image as technically perfect as possible so that nothing interferes with the story told by the photo.

When we otherwise view images in a photography book, in a journalistic account, or along side others in a gallery exhibit, the photographer applies the same technical standards to the photo. However, an image that has difficulty triggering emotion in the viewer in isolation may let the surrounding photos or narrative provide the context and thus bridge to the viewer’s experience.  One would argue that the second and third barn latch photos in this series do not connect with the reader as well as the first, whether the media is monochrome or color. 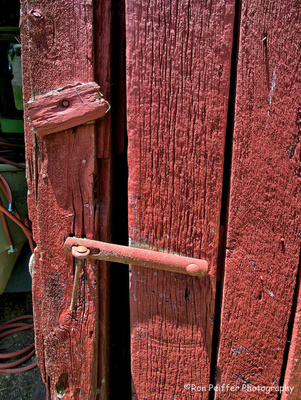 Hence, the dilemma.  Might a noncompetitive photo be successful if placed in a narrative or in a gallery beside other related photos.  Still, one viewer may connect, and another may not.  Consequently, rather than being discouraged by a judge or patron who rejects an image and moves on to the next, the photographer’s job is to build a better sense of what ingredients in a photograph allow the image to stand alone.  And in that vein, it is still our job to be certain technical and compositional flaws do not distract the viewer. 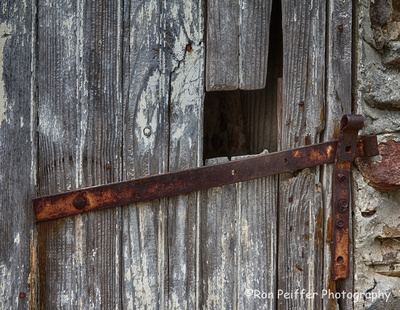 This seems like a small lesson, but I am finding right now that some of my images seem to form stronger connections in monochrome than many color images.  I am only reminded that the learning process never ends.  You need to get the photo right, but you need to make sure you have taken the right photo in the first place.   You need to decide if it connects with viewers without prompts from other nearby images or adjacent text.  And can you be sure the photographer isn’t seeing something personal in the image that connects with no one else?  Oh well, I’m still learning!

​Hmm…Now that I look at the three additional barn latch photos in the current context, they seem to work a little better as tools to support this narrative, though they didn't seem to work all by themselves.