I liked walking the s streets of New Orleans a few months ago for all the sights, sounds, and smells of the city.  (Apologies to modernists: Please note that I prefer the Oxford comma). Particularly at night, the city became alive, and the photo opportunities multiplied.  I set my camera on automatic ISO and used different modes on the camera, pending the lighting, so that I could capture images in the very dim lights of the French Quarter.  Neon glows blended with the light spilling out onto the dirty streets from bars, and the often-battered French Quarter lampposts, now retooled with LED lights, made an interesting mash-up of lighting challenges.  Along Bourbon Street, I saw a row of restaurant and bar signs that seemed to tell part of the story. 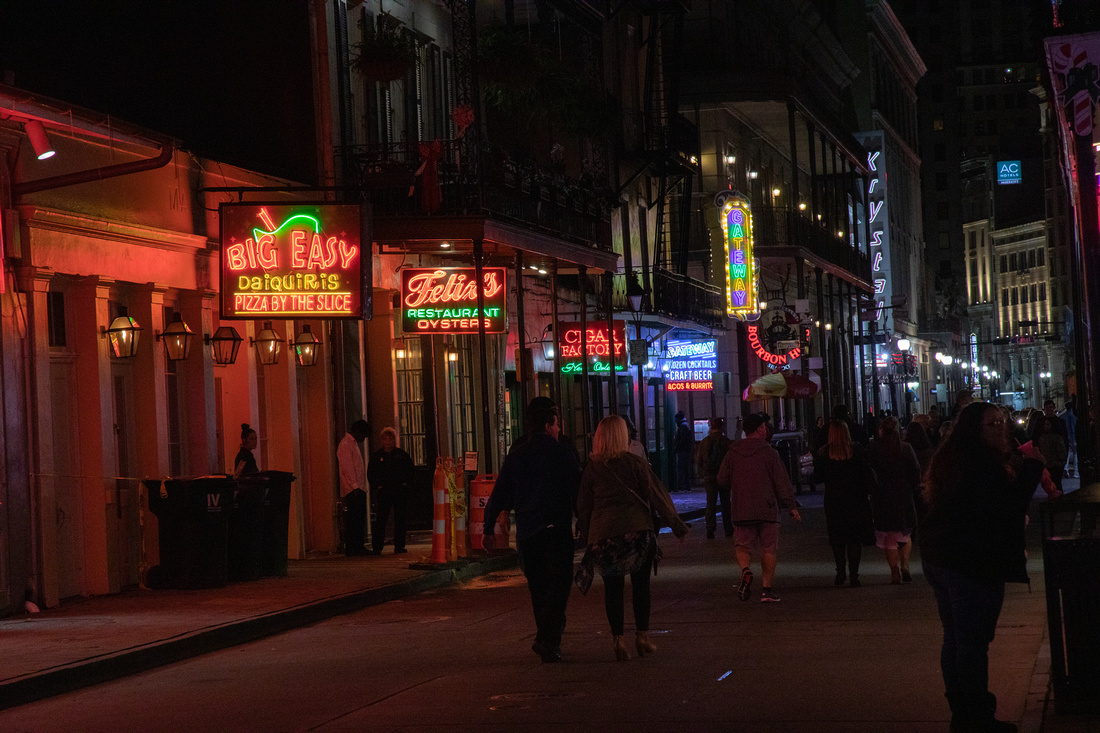 I cropped in close in post processing and dropped the exposure a bit more so the signs told the story.

The scene took on a brighter, vibrant mix of hues, and the people melted into the darkness. This image gives me chills, but the people have disappeared, which is the whole story of Bourbon Street.  The question becomes, did I make the photo better?  For a photography contest judge, the second image may be better because it is crisp, bright, and certainly leads the eye down one side of Bourbon Street and out of the French Quarter.  But the people are gone!  For me, the first photo reminds me of how human the late night traffic of the French Quarter really is.

At another point, I looked up and noticed the sign for the Monteleon Hotel and captured another image that seemed somehow sad and quiet, despite the cacophony around me, largely because of the contrasting color and pale blue light coming from the window in a nearby building. Here is where the photo took me somewhere I did not expect.

I loved the simplicity of the image, but I also felt it may not communicate to some viewers.  Consequently, I started on a paste-up that may or may not be to the liking of viewers.  First, I went into Photoshop and decided I might be able to take an adopted image from a recent studio shoot and drop in a layer over the window with the photo of one of the models.  After a little work, the image seemed almost believable.  Then, the more I looked at it, I found the O and N in the hotel sign might possibly be layered into the image to finish out the chopped-off name of the hotel.  After that, I duplicated the layer with the hotel sign and flipped it so that I could place the reflection of the sign in the window. Next, I brought in a lamppost and street sign from off of Bourbon Street and dropped it into the bottom left side of the image.  Lastly, I moved the hotel sign up a bit so that the three image elements were believably positioned and at the same time facilitated the movement of the eye across the image. The resulting image is below... 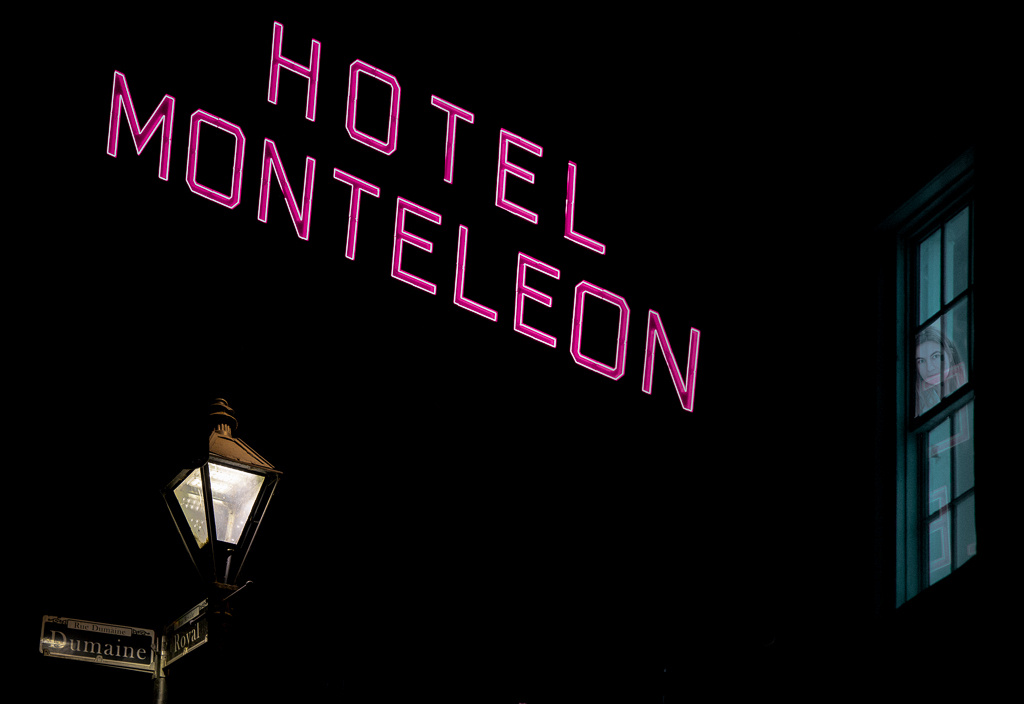 I'm not terribly bothered that the color of the hotel sign was altered in the process, but the photo now seems to tell a story.  All that said, the reason I was drawn to photograph the hotel sign in the first place was the simplicity and sadness of the night that is evoked by an empty, lit window, and the looming hotel sign in the distance. And the wide landscape scale of the image seemed to make the night seem deeper and more morose, perhaps.  It felt a bit like the ending scene from an F. Scott Fitzgerald novel.  But what do I know? I liked the original.  I like the new image for different reasons.  But then, that may be because I am too caught up in the creative process.  Maybe I didn't trust the viewer to use his or her own imagination to write the story that is laid out in front of them.  It kind of reminds me of why singer-songwriters often evolve during their lifetime from soulful tale-tellers in their youth to older, skilled musicians caught up in their own musicianship and genius with swirling, twirling arpeggios and dazzling keyboard athleticism.  They often lose their ability to tell a clean, moving story, e.g. Paul Simon's American Tune.  The raw and pure beauty of a simple, clean image, for me, outshines the genius of a photoshop paste-up, even if it is my own!