Competitions Are Really about Learning

Last month, my local camera club, Arundel Camera Club, had its annual dinner and unveiled the results of its end-of-year competition.  The end-of-year competition involves judging the first through fourth place winners from all categories--color and monochrome prints, digital images, and slides from both the novice and unlimited categories.  Having come from a background where I had dedicated my career days to formal education, these past couple years of informal education in photography has been very instructive.  It has also been instructive in terms of the competition process itself.  I learned how to edit, crop, and print my photos.  I learned how important it is to title photos evocatively, and I learned the mechanics  and art of matting photos as well.  In the end, I feel I am a much better photographer because I went through this process and continue to do so.  I am especially grateful to the numerous judges who gave of their time and talent to make these monthly competitions so educational and rewarding for so many of us.  Unfortunately, the three guest judges who judged our end-of-year competitions currently remain anonymous to club members, but we are appreciative for their contributions as well.

This year, my photograph of an orb spider entitled Back from Lunch won 2012-13 Photograph of the year. 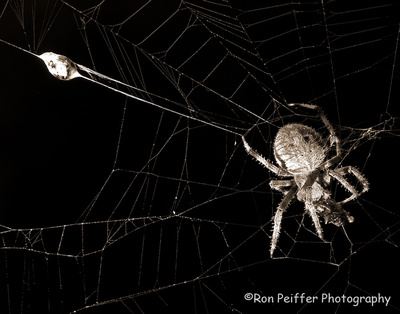 I was grateful for the recognition, knowing the work behind the image was invisible to the casual viewer.  Like most photos, this one tried the patience of the eight-legged subject as I found the correct lighting and exposure after many, many tries over several evenings. Then the hours in front of the computer trying to extract the detail and make the tattered web come into view paid off.  In the December 2012 novice monochrome print competition, the photo was awarded a fourth place.  I was very happy.  In May 2013, when the end-of-year competition rolled around, the spider photo was selected by the panel as the best image in all categories, including both novice and unlimited images.

Judges quite often preface their results by saying words such as, this is what I like, and other judges may judge very differently.  Wow, are they right.  But what is the sense of competing if the results are so variable?  There are individual images that I love and which have never placed in any competition.  I believe all competitive photographers have experienced similar results, and that's okay.  While I am very grateful to win, more importantly, I am grateful to learn.  one of the most valuable aspects of competing is listening to the feedback--lessons in things like leading lines, rule of thirds, saturation, composition, lighting, etc.  From many of my least successful entries I learned the greatest of lessons.  In some cases, I took the photos back home and rethought the treatment of the image.  Sometimes, the reworked image was a later winner, and sometimes not. But the lessons learned always exceeded the ribbons.  That said, any photographer loves it when that special image comes together and gets validation.

At the Arundel Camera Club end-of-year competition, I also found success with a color image created using HDR software.  The 2012-13 Novice Color Print First Prize winner was Sliver of Daylight (right, below). At the Franciscan monastery in Howard County, Maryland last summer, a work barn was open, and I wandered in to find a lot of typical and atypical wood items in storage and in disarray.  In the one corner of the barn a door was ajar and leaking a bit of daylight into an otherwise dark and dusty space. The image to the right, below resulted.  It placed second in the October 2012 Novice Color Print category.  When I studied the image recently, I began to rethink the processing and have begun a series of editing steps that will hopefully improve the image. It is interesting that this photo was one of my favorites last fall, and now I see many flaws I want to repair.  While online images do not always display fine edits so clearly, hopefully, a reworked image will appear here soon.

The image below is Negotiating a Merger.  This image actually began almost two years ago.  It tells a different story.  I had shot about a hundred photos of these copulating damsel flies at the bank of our community pond and discarded the attempt some time ago because I could not find a good image in the lot.  In December 2012, I resurrected the files from the shoot and found two images that overlapped.  After stitching the two together in Photoshop, I discovered it was possible to create a single good photo.  A little bit of editing and clean-up on the final image, and the resulting image appeared.  It placed Fourth in the December 2012 color print category that month and was awarded Second Place in the 2012-13 Novice Color Print category for the year.  This adventure justifies at least partly my propensity to hang onto old photo files for a while and not to pronounce them failures the first time around. 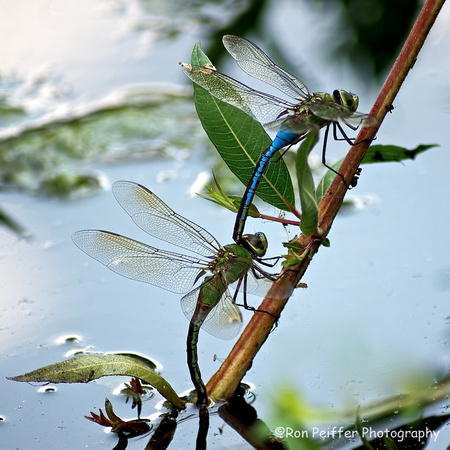 Several other photos won recognition this year in the club's 2012-13 end-of-year competition.  I am appreciative for what I have learned and to the other club members from whom I have learned throughout the year.  I have posted winning images in a featured gallery displayed on my home page if you want to view them and a little background on each.