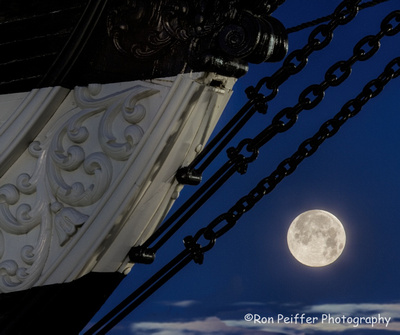 Getting up at 2:15 AM Sunday morning a week ago was not my idea of fun, but that is what I had to do if I were to catch the Super Moon.  The moonset nearly coincided with sunrise that morning, and a dramatic skyline or backdrop would be necessary to give scale and interest to the moon itself, which would be somewhat larger than normal at its perigee.  My friend Reb suggested Baltimore Inner Harbor, and The Photographer's Ephemeris (TPE) was my first reference to determine the best backdrop.  It set toward the eastern horizon, and the USS Constellation looked to be a good recognizable context if one stood a hundred feet or so to the east.  Arriving around 5:00 AM, four of us set up with our tripods, but each with a different perspective and goals in mind. It was a good setting to eschew aperture priority in favor of manual exposure settings.  What a morning for learning.  I wanted the ship to be exposed enough that it would be clearly recognizable, and of course, I wanted the moon to be as sharp as possible.  As you know, with a telephoto lens aimed at an object a hundred feet away and a moon a quarter million miles away in the same frame,  focusing became a problem.  And with a bright moon in a black sky versus the ship, which was lit faintly with ambient light, exposures differed.

Okay, so what to do?  I found that if I shot a correctly exposed and focused photo of the ship with the out-of-focus moon in the nearby sky, I could reshoot the same scene with the exposure and focus set for the accompanying moon.  All that seems easy, but it took a bit of work to make sure the moon was shot with a short exposure, but as sharp as possible.  A 400mm lens on an APS-C sensor computes to about 640mm, so the lens power was there to grab both subjects with some clarity.  The moon was captured with an ISO setting of 100 at f/32 for about 1/5 second.  This allowed me to get a pretty sharp image, but without the blur that would have occurred with a longer exposure.  I fiddled a bit with the exposure of the moon and shot a series of images just in case the preferred one was a little over or under optimum exposure, and I refocused for each shot. 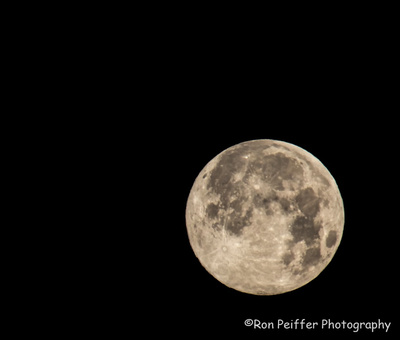 To capture the ship's image at its best, I composed the shot around the prow.  Carved detail in the white part of the ship's hull as well as chains and rope seemed to be interesting enough and, most importantly, was visible in the dim light.  I pulled back on the zoom to 210mm (336mm converted) and kept the camera on ISO 100.  At f/13, a 3.2 second exposure was adequate to get a good image.  I shot several photographs in sequence around the prow as the moon moved behind the chains and ropes, eventually reaching a point just in front of the chains.

I was able to get a few nice images in the process of trying to get good moon shots and good ship shots and have posted them in the Sunday Morning Moon gallery on my website.  I also shot a few long exposures of the harbor as the sun began to rise.  Those are also posted on the site.  I bracketed most of those images with from three to seven shots so I could either use HDR or use other post processing approaches with good single images.  I am starting to lean toward single shots since a lot of the newer software such as plug-ins in the Topaz and NIK suites often produce more natural results, yet still let you capture a good dynamic range as well as detail and color without over-saturating colors.

Meanwhile, what do you do after you finish a dawn shot and wives are still sleeping on a Sunday morning? Double T Diner for breakfast with your colleagues.  When I eventually got home, my wife was still snoozing, so I slipped away to the computer and downloaded the images.  Most of the work on the moon shot involved the new Clarity software from Topaz, with a little help from some of the brushes in Aperture.  I intentionally used an ISO of 100 to minimize noise, but I still did a final cleaning of the image with NIK's Define. The single shot of the moon shot at 640 mm provided a nice level of detail and sharpness that I liked, but I needed to use ReMask by Topaz to cut out the moon, resize it, and paste it over the blown-out moon in the best ship shot.  Though the initial moon image was about twice the size of the moon image I used in the final photo, the extra size permitted the camera to capture some of the detail on the moon's surface.  The paste-up done, I took the whole image into Aperture and used a variety of brush tools to bring out the ship's detail and to dodge the brightness of the moon's image to the appropriate level.

I can get into a debate with anyone questioning the honesty of a shot that looks like a single clean shot of the moon, but was actually a composite produced through multiple steps, but then again, the final product more accurately represents what my eye saw that Sunday morning. It was another lesson for me.  I give myself a B in planning in that I checked TPE for the right approach to the location.  I give myself a B+ for preparing my equipment the night before so that all I had to do was put the camera on the tripod and begin shooting.  I give myself a C for the time I lost in experimenting with the right exposure and composition.  A few dozen useless shots bear witness to my fumbling.  I do give myself a B for adaptability when I realized the focus and exposure issues and quickly regrouped with the plan to composite the image.

So how could I have done better?  The non-moon shots were incidental photographs I took in between moon shots or after the moon slipped behind a band of clouds shortly after my final moon shot.  I like some of those, but I have to say, I could have planned for them better and positioned myself better for maximum impact.  The water was like glass, and the reflections--particularly those from the Domino Sugar sign--were bright and bold.  The darkest early shots showed the best reflections of all.  The moon images were enhanced quite a bit with the post processing software, but it still comes down to the fact that you can't produce a good image by starting with a bad photograph. 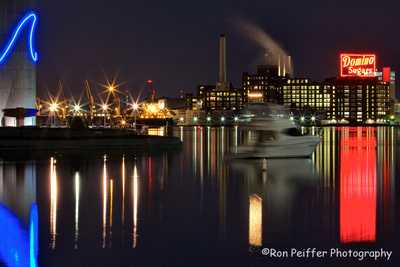 In all, a productive and instructive morning.